Using a new 3D printed microscale implantable device, a team of researchers successfully recorded electrical impulses that drive vocalizations in the peripheral nervous system of birds. Thanks to a customized technique that relies on thin-film microfabrication and nanoscale 3D printing, they were able to fabricate a nanoclip that is about the diameter of a human hair. It is the first cuff electrode for recording or stimulating peripheral nerves that was fabricated on a scale compatible with the smallest nerves in the body and could lead to a novel treatment for a wide range of diseases

The technique, described in an August 21, 2020 article in the journal Nature Communications, shows how lead investigator Tim Gardner, a neuroscientist at the University of Oregon’s Phil and Penny Knight Campus for Accelerating Scientific Impact, along with researchers from Boston University and GlaxoSmithKline‘s Bioelectronics Division, were able to fabricate the nanoclip on this very small scale. Furthermore, Gardner’s research team described successfully recording electrical impulses that drive vocalizations after implanting the device in several adult male zebra finches, a type of songbird. 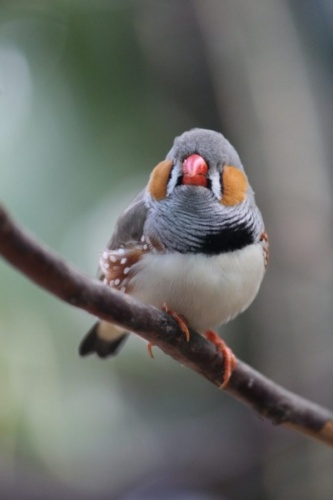 According to Gardner, the research is seen as an advance in the emerging field of bioelectronic medicine and eventually could lead to a new treatment for diseases such as inflammatory bowel syndrome, rheumatoid arthritis, and diabetes. The goal of bioelectronic medicine is to decode and modulate peripheral nervous system signals to obtain therapeutic control of targeted end organs and effectors. Experts suggest the field could revolutionize medicine and dramatically improve the outcome and reduce the cost of healthcare by impacting body functions as an alternative or supplement to drug-based interventions. Still, device miniaturization is one of the key success factors of future bioelectronic medicine, and according to the investigators of the study, the field still relies on some electrode-based devices that prove challenging to work with.

Gardner and his colleagues suggested that the nanoclip can decode and modulate electrical signals traveling in the peripheral nervous system, which contains nerves and neuronal cells outside the brain and spinal cord that control end organs. Moreover, bioelectronic medicine seeks to modulate these signals to treat chronic problems such as asthma, bladder control, hypertension, polycystic ovarian syndrome, or even the damaging inflammatory response in some COVID-19 cases.

“I think many future devices will involve a combination of thin-film microfabrication using standard clean-room processes and 3D printing on a micron scale,” said Gardner, who joined the University of Oregon in June 2019, after spending years in his lab at Boston University’s Department of Biomedical Engineering, where he originally did most of the research for this study. “This applies to biomedical implants as well as devices for experimental physics and other fields.”

The nanoclips for the study were produced using a 3D printer designed by the research team. The printer, Gardner said, can manufacture the devices up to 20 times faster than existing commercially available printers that operate at similar resolution. The microscale nerve interface was fabricated using a custom direct laser writing system that prints the anchor from standard CAD file designs that, in this case, used Dassault Systèmes 3D design software Solidworks. Thanks to the printing speed and digital design, the researchers could manufacture nanoclips with a range of sizes and shapes to achieve an optimal fit. 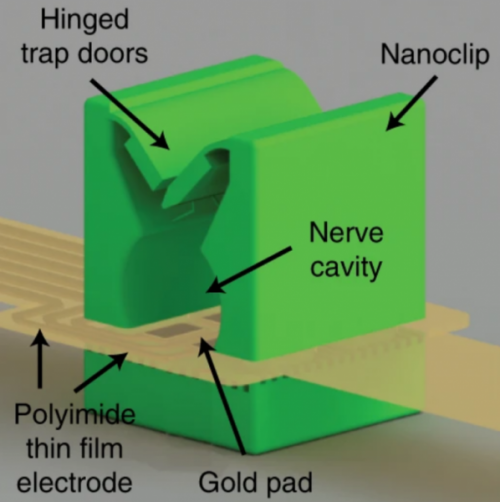 To realize an implantable device that matches the scale of small nerves, the thin-film electrode array was comprised of a 50-nanometer layer of gold encapsulated between insulating and biocompatible polyimide layers. The thickness and narrow width of the device yielded a low bending stiffness, comparable to that of peripheral tissues. The thin-film, multi-site electrode was custom fabricated using polyimide thin-film microfabrication techniques and subsequently wire bonded to a printed circuit board for connection to the test equipment.

n addition to achieving stable, high signal-to-noise ratio recordings of nerve signals during vocalizations in the 37 adult male zebra finch birds used throughout the study, the device allowed researchers to precisely control the output of the nerve. They were able to evoke distinct vocalizations for different spatial patterns of activation on six electrical contacts within the nanoclip. This type of spatiotemporal control may be useful for future biomedical implants that seek to not just activate a nerve but do so with spatial selectivity for specific structures within nerves that have different functions in the end organ, described the authors of the study. 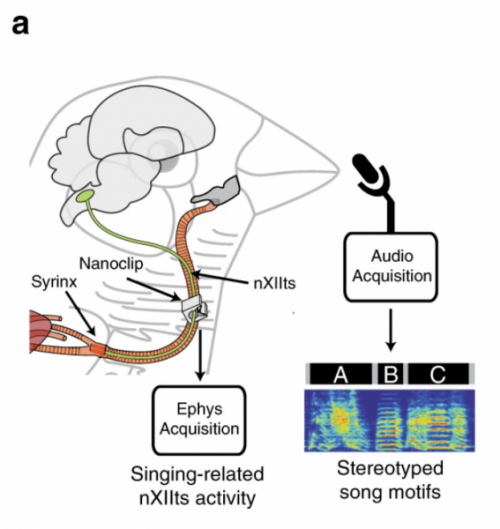 Scheme for the chronic recording of activity in the singing bird after a nanoclip was implanted on the right-side of the songbird tracheosyringeal nerve. The song-triggered acquisition software captured both vocalization and nerve activity. (Image courtesy of Timothy Gardner/Nature Communications journal)

One of the key features of the device was the ease of surgical implant, which remains an important outstanding issue in future bioelectronic medicine.

“Imagine you had to manipulate a small nerve and wrangle a device onto it using forceps to both open a cuff electrode and position it on the nerve. The micromanipulation required with current cuff electrodes can be damaging to the smallest nerves. In contrast, the 3D fabricated nanoclip can be implanted by just pushing it onto the nerve. This ease of implant may allow for keyhole or other minimally invasive surgery,” Gardner described. “This study is really an early test for new fabrication methods focused on submillimeter structures. A focus of the work in my lab in the Knight Campus is to refine methods for integrating thin-film fabrication and micron-resolution 3D printing and to use these tools to create new kinds of devices.”

The co-authors of the study considered that their nano-device was able to provide a new reference for the safe implant, stable high signal-to-noise ratio recordings over multi-week timelines, and precise modulation of small peripheral nerves. Although the development of the nanoclip takes advantage of other devices used for decades, here, the researchers were able to combine several factors to closely fit the device to the nerve. Although this study was successful, the investigators expect that future groundwork in additional species and nerves will be necessary to further validate the potential of the nanoclip. 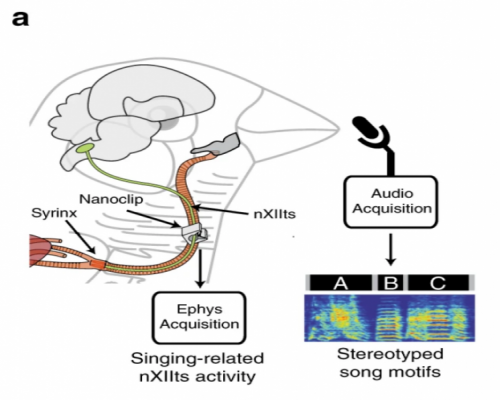 The authors concluded that to advance bioelectronic therapeutics, the basic science of nerve signaling in relation to physiological function must be expanded. Stating that “most existing studies only provide brief snapshots of nerve function—typically at time points close to surgery or later under anesthesia—and may fail to reveal true baseline functioning of nerves. Such intermittent recordings are ill-suited to reliably tracking signals over time, making it difficult to discern how peripheral circuit dynamics are shaped over longer timescales by developmental, disease, and restorative processes.”

Supported by the National Institutes of Health (NIH) and a sponsored research agreement with GlaxoSmithKline, the research demonstrated that the precisely sized nanoclips could achieve a precise functional modulation of a songbird syrinx. Study lead author Timothy Otchy, a research assistant professor at Boston University, along with his colleagues, demonstrated flexible, precision control of an end-organ. Putting within reach a new generation of bioelectronic therapeutics centered on closed-loop control of peripheral circuit function and could become key to advance healthcare in the coming decades.