In a collaboration between United Therapeutics and 3D Systems, researchers have succeeded in developing a complex 3D-printed human lung scaffold. The lung scaffold was unveiled at the LIFE ITSELF conference in San Diego and is considered to be the most complex object ever created using additive manufacturing. The lung scaffolds, which have already been animal tested, are planned to be made in the future with the patient’s own stem cells.

Lately, you’ve probably heard a lot about the various applications of bioprinting. This new form of 3D printing using living cells is becoming increasingly important in medicine. For example, a surgeon in the USA has recently successfully transplanted an ear implant made from human cells. Most famously, it is expected to be able to create fully functional organs for human beings. Though this is not yet possible, steps like this lung scaffold chose the immense advancements which have already happened thanks to 3D printing. 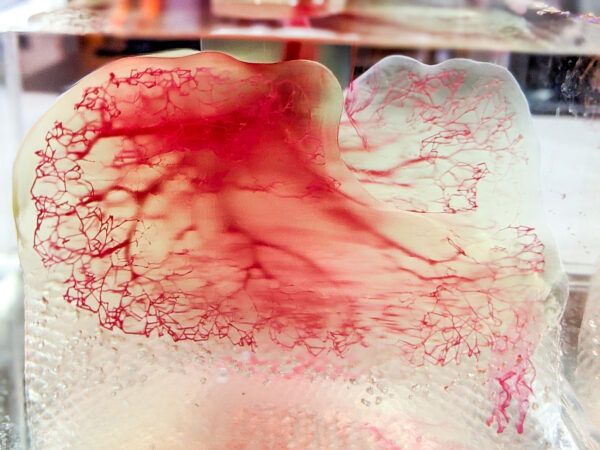 The Structure of the 3D Printed Lung Scaffold

The 3D printed lungs consist of a record 44 trillion individual parts (voxels), which are distributed over 4,000 kilometers (~2500 miles) of lung capillaries and 200 million alveoli. United Therapeutics scientists, therefore, plan to cellularize these 3D printed lung scaffolds with patients’ own stem cells. This method may make it possible to create compatible, transplantable human lungs in the future. By using each patient’s own stem cells, the bioprinted lungs would carry a significantly lower risk of rejection, thus not requiring immunosuppression which can be very dangerous for the patient. The newly developed advanced photopolymer-based bioprinting technology called Print to Perfusion could enable this type of donor organ to be manufactured in as little as three weeks.

According to Dr. Martine Rothblatt, chief executive officer of United Therapeutics, these 3D-sculpted lung scaffolds have already been tested in animal models, which have demonstrated the successful gas exchange of the lung scaffolds. Rothblatt commented, “With the continued hard work of dedicated scientists and engineers at United Therapeutics and 3D Systems, we hope to have these personalized, manufactured lungs cleared for human trials in under five years.”

The goal of the collaboration, she said, is also to create an unlimited supply of transplantable lungs in the future. For example, they would already use a process called ex vivo lung perfusion. This could increase the supply of transplantable lungs by extending the period of viability of human donor lungs by several hours. This method has successfully prolonged over 230 lives to date.

The demand for donor organs is steadily increasing. In 2021, for example, 2,524 patients in the U.S. received a lung transplant, according to the U.S. Health Resources and Services Administration. As of June 3, 2022, there were also 1,075 patients in the U.S. on the waiting list to receive a donor’s lung. Meanwhile, more than 150,000 Americans die each year from lung disease, including many waiting for a transplant. You can find out more about the project HERE.