It's not as crazy as it sounds! Learn about some of the most sucessful 3D printed car projects, including about how long they took to make.

Even though there’s been remarkable development around 3D printed cars, it may still be a while before we enter the era of mass production. Most 3D printing automotive projects are either prototypes or 3D printed car parts. (Companies have been 3D printing car parts for quite some time already.) And despite considerable progress in optimization, design, and sustainability, 3D printing technology still isn’t capable of printing an entire car.

Regardless, one thing people often wonder about in the context of 3D printing a car is, how long does it take? To answer this, we’ll need to consider several variables, since a car is a complex device with hundreds of parts composed of various materials. For the purpose of this article, though, we’ll consider a 3D printed car to be one that has its entire body 3D printed, including a majority of its components and excluding the main functional parts like the wheels, chassis, and engine.

With this definition in mind, let’s take a look at a real-life example of what to expect if you intend to “try this at home.” We’ll then briefly highlight some of the factors that can affect printing speed and, lastly, look at several cool 3D printed car projects to finally arrive at our answer.

In Your Own Driveway 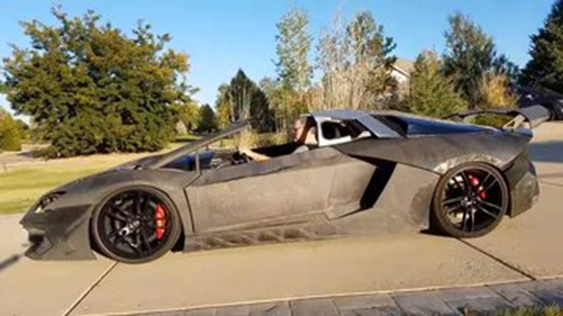 Sterling Backus, who wanted a project that could serve as an educational tool for STEM programs, made a replica of a Lamborghini Aventador after his son drove one in an Xbox video game. Mr. Backus dubbed his $20,000 project the “Interceptor”, hand-building the chassis and using a V8 engine to power the car.

To start, Sterling found the panel layouts from an online forum and modified them for printing. Unfortunately, the printed plastic couldn’t withstand the sun’s heat, so he incorporated carbon-fiber encapsulation.

For all his printing needs, Sterling used a Creality CR-10. He also admits to having watched a fair amount of informative YouTube videos. 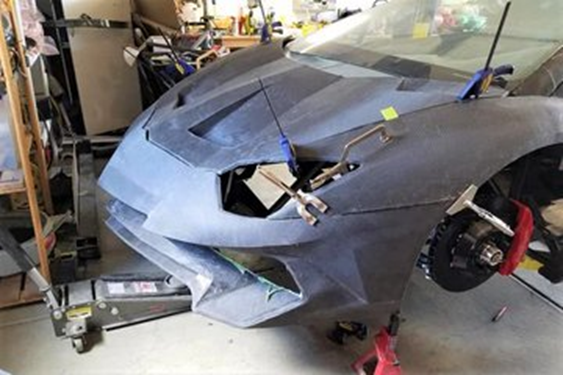 This project got so much attention online and in the media that Lamborghini gave Mr. Backus a real Aventador. We can’t promise this will happen to you if you try to build a car at home, but hey, it’s worth a shot!

If you’re looking to print a car at home, you may need to print lots of smaller pieces and join everything together. But if you only want to replace some parts, start by checking out the top sites for 3D printed car parts.

Read on to find out some of the factors that you (or anyone interested in 3D printing a car) will need to take into consideration.

There are several factors that affect printing time for 3D prints, and printing cars are no exception.

Let’s start with a simple one: The bigger the car, the longer the print time, as the extruder has to create more layers. Also, if the parts are complex, you can, of course, expect a longer printing time.

We all know about this trade-off in 3D printing. Since the quality of a print largely depends on the layer height, a thinner layers mean better quality but comes with a longer printing time. Layers are adjusted in your slicer and are usually between 100 and 500 microns. Some tips can be found in our guide to getting the perfect speed on your printer settings.

Most will likely use an FDM printer, either in cartesian or delta form. While both have their pros and cons, there’s general consensus around delta versions being faster owing to the fluidity of movement.

The LSEV (low-speed electric vehicle) was meant to be the first mass produced car that would be 3D printed. It was expected that this car would go on sale in late 2019 for $10,000, but we have yet to get an update from the manufacturers.

The vehicle comes from a collaboration between the 3D printing materials company Polymaker and the Italian automaker XEV. It takes three days to 3D print all of the parts for the LSEV.

Unlike “normal” cars, which have 2,000 plus components, the LSEV only has 57. And with the help of large-format FDM technology and four different grades of TPU (thermoplastic polyurethane) and polyamide (commonly known as nylon), the two companies were able to cut down the production costs significantly. 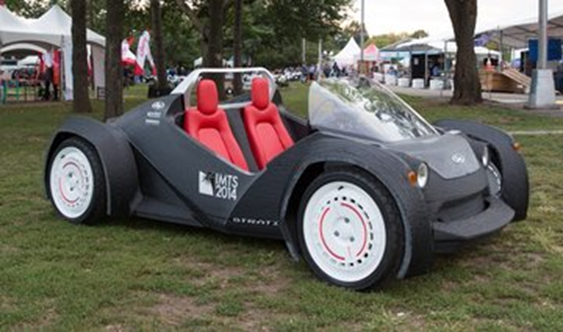 The Strati was first showcased at the 2014 International Manufacturing Technology Show in Chicago, a collaboration between Local Motors, Oak Ridge National Laboratory (ORNL), and Cincinnati. It took 44 hours to 3D print the Strati, followed by three days of milling and assembly.

Since then, ORNL has decreased the printing time to less than 24 hours and is still carrying out more research with the hope that the car can be printed in less than 10 hours.

Only the Strati’s body is 3D printed, not the mechanical components, but it’s still an excellent demonstration of the capability of 3D printing. The manufacturer maintains that the Strati is the world’s first 3D printed electric car and that 3D printing was used for everything except the “mechanically-involved” parts. 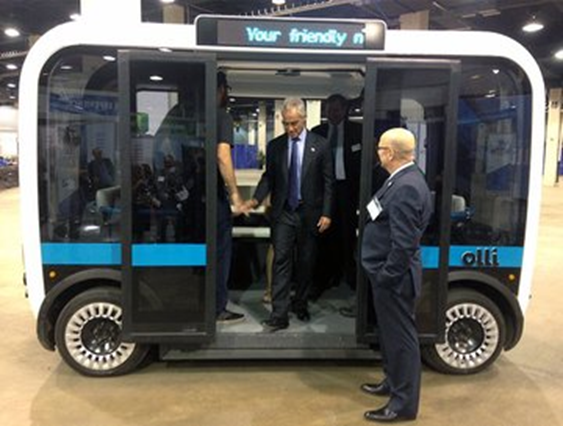 Olli 1.0 made its debut in 2016, and then Olli 2.0 came out in 2019. Both have major similarities and come with level 4 autonomous capability, meaning they can self-drive in certain conditions without any human assistance.

Unlike its predecessor, Olli 2.0 is 80% 3D printed, has more range on a single charge, and comes with hub motors. Its user interface has also been significantly revamped.

Since the introduction of this electric and driverless bus, Local Motors has tested more than 2,000 combinations of additives and printing material. Olli 2.0 currently takes about 10 hours to print and assemble. 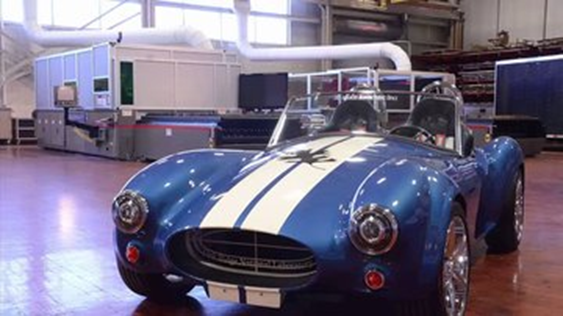 The car was printed using the BAAM machine, which allowed it to have strong, lightweight composite parts that are greater than one cubic meter. The 3D printed version of this classic car contains around 500 pounds of printed pieces made of 20% carbon fiber.

This tear drop-shaped, three-wheeled, two-passenger vehicle was the brainchild of engineer Jim Kor. He made the body using FDM technology and had a dream for a modern, sustainable vehicle that would revolutionize commuting.

Mr. Kor leveraged 3D printing’s design freedom to combine several parts of this car into simple, unibody shapes. The lightweight construction of the exterior allowed for a minimum amount of drag and fuel consumption. One of the coolest parts (no pun intended) is that the car’s exterior of plastic and metal eventually became just one piece, which according to Mr. Kor, only has a 0.15 coefficient of drag. (Average modern vehicles have a drag coefficient between 0.25 and 0.3.)

However, not all of Urbee 2.0 was made using 3D printed plastic; crucial parts were still made out of metal. The car is powered by a 36-volt electric motor that was used for most of its driving power, plus an ethanol engine for increased speed. Urbee 2.0 ended up with a curb weight of less than 1,200 pounds, meaning it would technically be registered as a motorcycle rather than a passenger car.

The Urbee was supposed to be the next big thing in urban transportation, but unfortunately, we haven’t heard much since it was first introduced in 2013.

What Time Is It? 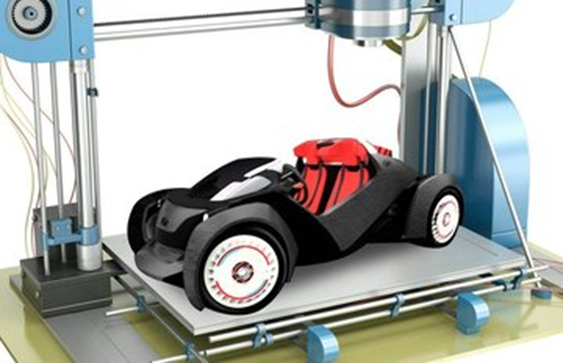 Using the above examples as reference points, we can offer a quick and dirty answer to our question: about 2 days. That’s 48 hours of printing the car’s body plus its components, not factoring in the post-processing work that would need to go into the finished car.

We also have to acknowledge that 3D printing on the whole is getting faster and faster, and the same goes for our 3D printed car examples. Don’t forget, it took 44 hours to print the Strati back in 2014, but that time has been slashed now to 24 hours, with the hope that it can come down to just 10.

Ten hours is quite impressive and a great leap forward considering it took around 100 days to print the Urbee back in 2003. If we continue with this trend, we can only guess that the printing time will keep decreasing, and you’ll probably be able to print an entire car in just a day. Now that’s futuristic!