While 3D printed spares are seeing increasing use in rail transport, it is now seeing deployment in an even more high-performance application: the repair of fighter jets. Swedish military firm Saab is test flying 3D printed parts on its Gripen multirole combat aircraft. The company 3D printed an exterior hatch for the jet as a means of demonstrating the possibility of quickly producing spare parts for battle-damaged aircraft.

Conducted at Saab’s Linköping airfield on March 19, the two-seat JAS 39D Gripen fighter flew with a 3D printed hatch that had already undergone extensive testing. The hatch is routinely used to access the plane’s chaff and flare countermeasures system. This component is damaged regularly, including in everyday procedure. It was made without 3D modeling and instead by 3D scanning the part, attaching it to the jet and then using it in the air. 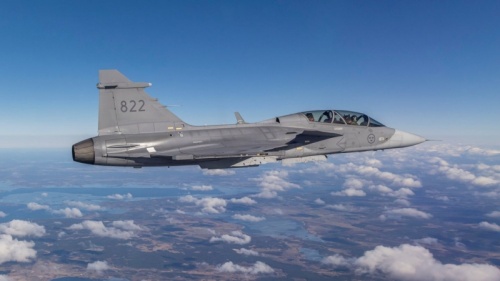 Pre-flight testing included analysis for strength, temperature resistance, and ability to remain attached to the jet during flight. While the part survived a traditional flight, it did not experience a supersonic ride, but the Additive Manufacturing Group at Saab believes it could. Interestingly, the part was made from PA2200 nylon, but the company believes that other materials could work as well. As a spare, the component could just be cleared for 10 to 15 flights, while a true factory replacement is made and shipped.

While the company has 3D printed parts for aircraft before, this is the first time it has been used to manufacture an exterior part. The project is a part of Saab’s Additive Manufacturing Group research into battlefield replacement parts for the past four years.

“Post-flight initial inspection of the hatch was very positive and showed no visual structural changes had occurred from the flight,” said Håkan Stake, contract manager for support to Gripen C/D, and manager of the development project. “The potential of this approach means that maintenance personnel in the field can get access to individually fitted spare parts and you no longer have to resort to emergency fixes nor cannibalize other broken-down aircraft for their parts, while also further reducing the small number of parts brought on a deployment. This also reduces the operational time lost in repairs.”

The goal for the Swedish manufacturer would be able to produce spare parts on site, regardless of location, by 3D scanning the needed item and 3D printing it on-demand. This would reduce the need to depend on having inventory near the field of war, also opening up the possibility of deploying quickly in a new environment. 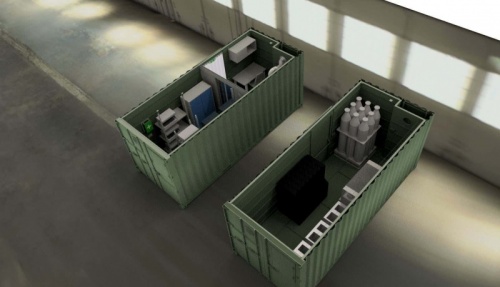 Saab sees benefits for the technology in reducing aircraft weight, production lead times, and cost, this last metric cut by 60 percent. According to Saab, these benefits have already been proven with a classified “highly complex airborne subsystem.”

Like many other military providers, Saab is exploring the possibility of containerized 3D “printshop” for deployment in remote airstrips. The facility would be used by just a pair of operators to 3D print spare parts on demand without the need for extensive training. The first components being explored are those that receive damage from handling or through daily use, but more testing is necessary before they could be used in the field.

With containerized production facilities, we can easily see how unique and powerful concepts that could be explored for more humanitarian uses is being given a military bent due to the resources at the disposal of defense contractors. While U.S., Dutch, and Swedish military agents are developing shipping containers for field deployment of additive technologies, similar setups would likely be extremely valuable in disaster scenarios, remote environments and third-world nations. They could trickle down from the military-industrial complex to humanitarian applications, but, outside of industrial uses like shipping and oil & gas, they would likely more as a PR tactic by the military or through a non-profit.