Created in collaboration with the event's organizer Loretta Whitesides

Designer Anouk Wipprecht‘s latest Meteor Dress creation is an illuminating star gazing dress with 3D printed parts that light up every time a meteoroid falls through the night sky, through a sampling of past real-life meteor data. The dress—which shows the data through 3D printed triangle-shaped geometries with integrated light pulsations—will be shown during the world space party ‘Yuri’s Night’, organized by Loretta Whitesides, Co-Founder of the event, Zero-G flight director, and a founding astronaut at Virgin Galactic.

We’ve come to know Anouk Wipprecht for her innovative use of 3D printing for creating advanced, interactive wearables that show us a glimpse of what the future holds for smart, wearable consumer products. Her ultimate goal is to make fashion an immersive experience, combining garments with electronics and robotics, equipped with sensors and meaning she strives to engineer a new generation of wearable robotics and electronic wardrobes that listen to the wearer’s body and surroundings.

In this quest, her creativity has sometimes come to terms with the needs of actually wearing the dresses, thus reconciling extreme use of technology with a more “casual” and comfortable style. As 3D printing and materials evolve, becoming less and less intrusive, they will eventually meet with consumer habits, bringing smart, customized wearable products to the masses.

The Meteor Dress is the designer’s first space-data project. “I wanted to take data from space. In this case, take data from meteors and display it in a dress. Meteors are interesting for me; a small body of matter from outer space enters the earth’s atmosphere, becoming incandescent as a result of friction and appearing as a streak of light. We try so hard to engineer our way towards space, while these bits of space fall effortlessly toward us. It pays a tribute to that.”

The dress runs a Python script that generates meteors at the given rate and the correct brightness distribution, as it would have been observed in the sky. When the idea was to create something for Loretta during Yuri’s Night and she proposed the idea of creating a meteor-data dress. Anouk got in contact with Denis Vida of Global Meteor Network to learn more about what data she might be able to use, and where possible in real-time.

Vida is a Meteor physics postdoctoral researcher and is building a global network of video meteor-recording cameras through the Global Meteor Network “The goal of the GMN project is to observe meteors, by a global network of cameras pointed at the night sky. Each camera is connected to a Raspberry Pi running open-source software for video capture, compression and meteor detection,” he explained. 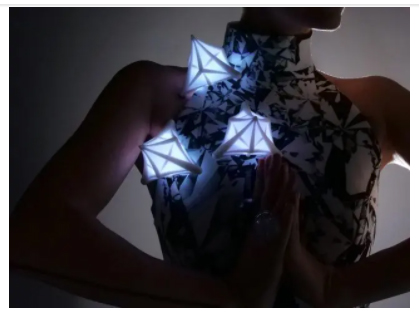 The Meteor Dress’ 3D printed parts light up based on past meteor recording data from the Global Meteor Network.