It took ten years for the payoff; a decade, for an industry to come into line with the idea Clément Moreau had of the 3D printing space and a business to truly become what he intended it to be.

In 2019, as the Sculpteo CEO surveyed the orders coming through its online portal and as he stepped onto the factory floor, there were finally more batches of production parts being shipped out than prototypes. Ten years in the making. There had been decisions made and routes taken that, in hindsight, were a mistake, though perhaps necessary ones looking back. ‘A lot of pain, a lot of achievement, that’s life,’ Moreau reflected, but that’s not to say he wanted a repeat as he plotted the next chapter.

Sometime in between Sculpteo’s last round of funding in 2015 and its eventual acquisition by BASF in 2019, it dawned on Moreau and his fellow founder, engineer and serial entrepreneur Eric Careel, that, the way the business had been running - funded by venture capitalists and guided mostly and independently by their own intuition - there was little to suggest the next decade would be much different. Nothing changes if nothing changes. As Moreau stood at this crossroads, he had a decision to make.

“We could go to the venture capital and raise a bunch of money, which was not impossible, it was even quite easy at that time – and we had good investors already with really deep pockets and a long-term vision – or we could try to develop an industrial partnership,” Moreau told TCT. “I wanted to follow this road. And down that road, this industrial partnership evolved into a full buyout.

When Moreau and Careel first set out in 2009, the landscape was different. The company had invested in 3D printing technology to build its rapid prototyping service, the chief application of the time, but one which would soon make way for real, functional, end-use parts. Or so they thought.

Today, we have machines producing the same part for one year, every day, 24 hours a day. That's the kind of application that you can rely on; build a profitable business on.

What actually transpired in the short-to-medium-term was a wave of hype that went counter to the Sculpteo founders’ own estimations, something they look back on as one of those aforementioned mistakes. Projections of a printer in every home would not come to fruition; the applications, nor the appetite, for 3D printing to become a commonplace home appliance ever materialised, and yet: “You couldn’t afford not to make this mistake,” Moreau said. “It was not possible to stay with the vision I knew, sometimes you have to follow the hype a little bit, surf the wave, but at the same, by doing this, we lost time on the real ambition.”

This period was a bump in the road that took Sculpteo to where it is today, a profitable business operating under the BASF umbrella, but it wouldn’t be the last. In the subsequent years, once the hype curtailed, Sculpteo went through a phase of, and not with absolute success, broadening its services and implementing and integrating too many new resources and pieces of equipment too soon. The company was tackling ‘all sorts of different applications, all sorts of new materials, new software, a lot of other new things,’ that not only cost the company a ‘tremendous amount of money’, but did nothing to make up the time that had been lost during the hype era. Through 2017 and 2018, Sculpteo ‘refocused’, identified what it was good at, concentrated on that business, and achieved profitability for the first time.

A year later, the company would begin operating under one of the biggest brands with a play in the additive manufacturing space. BASF brings with it deep pockets, deep expertise, assured guidance and, of course, materials, the lack of which, over the last ten years, has caused Moreau much stress. While now, Sculpteo can go to BASF’s labs to act as a go-between when manufactures are enquiring about materials with certain specs, can talk to materials scientists directly and ask about developing specific materials to meet the demand, and maybe even influence proceedings a little, before, materials were the cause of much frustration.

For years, Moreau has had no other option but to let down manufacturers coming to Sculpteo with a material spec: “We have big customers come to the office and say, ‘my needs are this and this, and I need this mechanical and this thermal resistance, build a material for me,’ and you have to say, ‘this is not how additive manufacturing works – here is a list of 12 materials, select the least worse one.’” These conversations, he says, came as a bit of a shock. For both sides.

“I really believed the additive manufacturing world is going the wrong way. We have been proprietary: machines, plastics, formulas, all of this is proprietary, and nobody can change it, nobody can tweak it. You can’t even put an EOS powder into a 3D Systems machine, which is crazy. If you come from any other manufacturing domain, of course you can mix providers. That was, for me, a shock but I believed it will not stay like this. 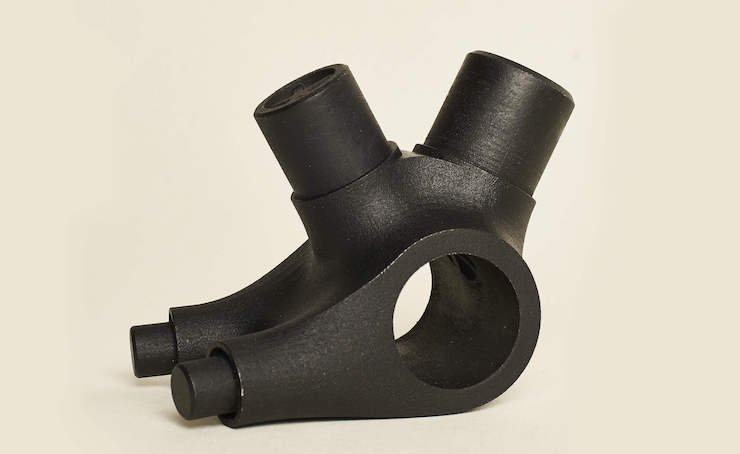 And so Moreau and Sculpteo enjoyed seeing trade show stands emblazoned with the brands of BASF, Clariant, SABIC, Evonik, Arkema and co. pop up as the years went by. For one, he could begin having less of those dialogues with manufacturers bringing their material specs to Sculpteo HQ, but he could also put to bed any ideas of building materials R&D infrastructure internally, which, in fact, had gone way beyond a thought rattling around in his head by this point.

“We tried,” Moreau revealed, “I had two chemistry engineers, but it’s not possible. You can’t launch anything serious with a couple of people. You need ten years of experience just to build the lab, just to follow security procedures. So, we said, ‘okay, forget it. Let’s try to benefit from somebody else,’ so we also did an academic partnership. [We thought] this is great, these are Nobel Prize-level guys, however, it still needs ten years before you realise a profit.”

That, of course, was not something the Sculpteo hierarchy was willing to do again. Moreau never expected anything to take that long, and doubts whether he, or anybody for that matter, would have got into the 3D printing business back in the late noughties if they had known that it would.

By 2013, four years into the Sculpteo project, Moreau was a bit more clued into the task at hand. For four years, it had been predominantly delivering prototype components to its industrial customers, and a series of gadgets and customised items to its consumer base. The technology was developing, there was interest and investment from manufacturers aplenty, but real, end-use, series production parts were still scarce. As President Barack Obama stated that ‘3D printing had the potential to revolutionise manufacturing,’ potential is all it was.

It was around this time that Sculpteo wanted to put that assertion to the test and begin asking manufacturers, beyond their own clientele, how they were using additive manufacturing, and how the industry could help make it more accessible. The annual State of 3D Printing Report was born, with the sixth successive one, and biggest to date with more than 1,600 respondents, to launch next week.

From that report, the willingness to invest in 3D printing technology appears to be on the rise, though the cost of the technology and materials remain a barrier to adoption for many, and there are still cries for the tech to be more repeatable and the materials to be more varied. There’s also little movement in mass customisation parts, the long-supposed killer application of 3D printing, which Moreau, looking at the figures in this latest report and then glancing at the mobilisation of 3D printing factories to provide PPE equipment on-demand at the point of need during the COVID-19 crisis, thinks might have been a miscalculation.

“The real killer app is what you see during this Coronavirus crisis, the fact that we can actually fill the gap in the supply chain, adapting very quickly and meeting unplanned needs. We have been creating adapters [to turn] a scuba diving mask [into] a medical respiratory mask – nobody would plan that, nobody would do a mould to adapt a diving mask into a medical device, of course nobody would do that. This is where 3D printing is really impressive. I wasn’t sure whether 3D printing was going to play a role in this crisis, I was a little doubtful, but in the end, the facts are here: 3D printing helped to save lives. I can’t tell you how many, but clearly it has been important.

“Short run production, on-demand production is the real killer app of 3D printing and that’s what we see in this report. Yes, it’s nice, mass customisation, but who really needs a customised [part]? Where the real value is, is where we build an adaptor to adapt a diving mask into a respiratory device. That will change the future. People will understand and see 3D printing has a real role because we can fill gaps in the supply chain.” 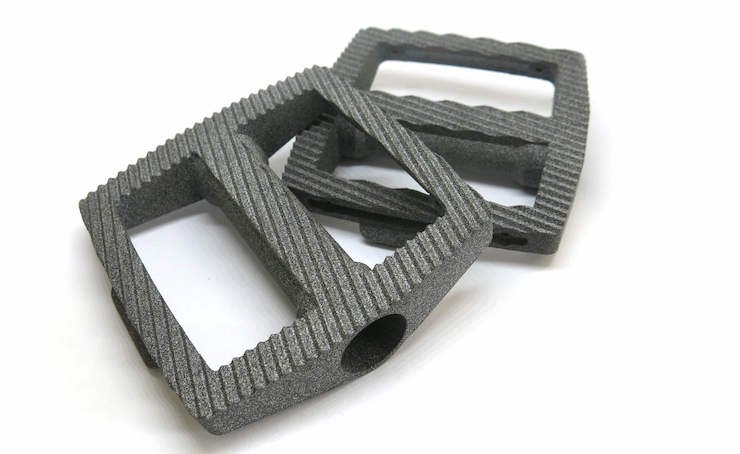 It’s worth pointing out, Sculpteo’s 2020 State of 3D Printing Report was carried out prior to the widespread deployment of 3D printing technology in response to the COVID-19 outbreak, which only adds to Moreau’s excitement at this next figure. For the first time since Sculpteo began the yearly survey of manufacturing professionals, the application of 3D printing for production applications has exceeded the 50% mark. It stood at 48% last year and a meagre 17% when the first survey was conducted in in 2015.

“Today, we have mass market applications. Today, we have machines producing the same part for one year, every day, 24 hours a day,” he emphasised after recalling Obama’s proclamations in 2013. “That’s the kind of application that you can rely on and you can build a profitable business on.”

Sculpteo is doing just that. In his own factories, from numbers gathered last year, Moreau says 55% of Sculpteo’s business was in the production of end-use components, with small parts like electronic housings being additively manufactured at volumes up to 100k. More than ten additional 3D printing systems are set to be installed this year, while some kind of 'global network' has been teased, with no more detail as yet forthcoming. And again, there could yet be an uptick in the demand for 3D printed parts, either directly, through its own assistance, or indirectly, because of an enhanced faith in the technology, after COVID-19.

This crisis, should it have any impact, would be a catalyst to the increased application of additive technology for short-run production means, Moreau believes, and he does so because he has the feedback of 1,600 survey participants and the growth of his own company to uphold the view that 3D printing is becoming a true manufacturing technology, and has been on that trajectory for years now.

That his business is mirroring the trend he sees in the wider industry told Moreau that, as the company looks to move forward, it was the right time for change. Enter BASF.

“This is the time to scale,” Moreau said, “but scaling industrial capacity is tremendously hard and time consuming. If I wanted to build this with only money, it would have taken another ten years. I think 3D printing is evolving so fast that we don’t have ten years anymore. If we continue to develop by ourselves, and only by ourselves, then I’m pretty sure that we will lose the opportunity. When it came to the tipping point, asking what should we do? Where should we go? We decided we should find a partner, the right partner that brings something to board, and BASF was clearly the best.”