As public health officials and philanthropists race to find treatments for COVID-19 — the respiratory disease caused by the novel coronavirus — researchers at universities and companies, like Novoheart Holdings Inc., are trying to speed up traditional drug and vaccine development processes without compromising patient safety by creating miniaturized versions of organs using 3D bioprinting and stem cell engineering.

Like traditional 3D printing, bioprinting uses a device to construct a three-dimensional model created with a computer-aided design system. Instead of using plastic filaments, however, bioprinters use cells mixed with biocompatible materials, called bioinks, to create three-dimensional systems that act like human organs and tissues. These systems can then be deployed in tests by drug developers or, in some cases, implanted into the human body.

This process of creating human organs and tissues out of pre-existing cells is not a new concept; the Wake Forest Institute for Regenerative Medicine produced new organs by hand for years for patient transplants, said Anthony Atala, the institute's director.

But the 3D-printing machines let Atala and his team automate the regenerative medicine process, and a new area of bioprinting has emerged: miniature organs.

These 3D-printed samples of organs are placed within microchips that are connected with a system of microfluidics, Atala said, so that they act like actual human organs. With these organs, researchers can test drugs and therapies for toxicity in the human body without human or animal model testing.

Atala said that some drugs may show no toxicity in cell cultures, animal models and human clinical trials, but after a few years on the market, these drugs prove harmful to humans.

For example, in 2000, the U.S. Food and Drug Administration recalled the diabetes drug Rezulin after it was found to cause liver failure, and 63 people died.

However, Atala said that when his team tested Rezulin on their miniature organ systems, they discovered toxicity in the liver within two weeks.

While these miniature organs have proven effective in drug testing, Atala does not expect human clinical trials to go away any time soon. The organs need to be standardized and validated, and from a regulatory standpoint, human trials are still required.

"The hope is to use these systems initially to help select the best therapies before they get to patients," Atala said.

Heart in a jar

Now researchers are using these miniature organs to select the best therapies to fight COVID-19.

Novoheart has created a human ventricular cardiac organoid chamber, referred to as a 3D "heart-in-a-jar." 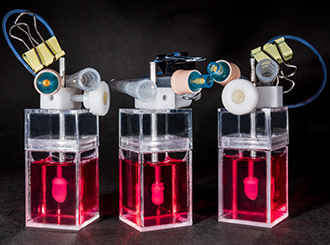 Rather than 3D printing these hearts, Novoheart uses stem cells to engineer heart tissue. This tissue is then placed in a hollow pump that mimics a human heart.

At the moment, Novoheart is providing its miniature hearts to companies that want to test the effects of certain potential COVID-19 therapies, like hydroxychloroquine and azithromycin, on the heart.

This is especially important as the U.S. FDA recently cautioned patients against using hydroxychloroquine for COVID-19 use due to reports of serious heart rhythm problems often when taken in combination with azithromycin.

The miniature hearts enable researchers to observe the mechanisms by which these drugs cause arrhythmias in the heart without testing in humans, Roger Hajjar, Novoheart's chief medical officer, said in an interview with S&P Global Market Intelligence.

Another benefit is that they are also able to study the coronavirus's direct effects on the heart. Hajjar said that researchers at Novoheart, alongside researchers with an infectious disease laboratory in Hong Kong, have found that the virus can cause myocarditis, or inflammation of the heart muscle, in patients with COVID-19. Myocarditis can ultimately lead to heart failure or death if left untreated.

Similarly, Atala and his team, in collaboration with George Mason University, are injecting miniature organs directly with the coronavirus in order to see how each organ becomes infected. In the future, the Wake Forest Institute for Regenerative Medicine team aims to study COVID-19 drugs' effects on the organs.

As many companies speed up the production of coronavirus therapies and typical regulatory guidelines are set aside, 3D mini-organs may see greater use as researchers seek a quick way of testing the effects of these drugs, proponents said.