The Haas Moto Museum and Sculpture Gallery in Dallas, Texas has an extensive collection of over 200 unique motorcycles ranging from 1899 to the present, 50 of which are one-of-a-kind. Now, it’s adding one more to the set – a beautiful custom electric motorcycle, featuring 3D printed titanium parts, built by Atlanta, Georgia-based Fuller Moto.

The museum commissioned the company to develop a futuristic concept in the style of the French 1929 Majestic motorcycle to join the rest of the Fuller Moto bikes on display there. We’ve seen a lot of amazing custom 3D printed motorcycles over the years, but nothing quite like this. Fuller Moto’s 2029 is a true work of art. 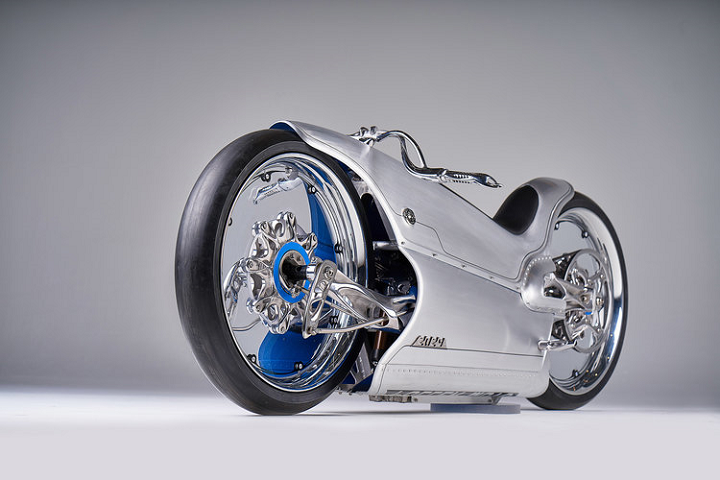 “We know we are doing something that has never been done before,” Bobby Haas, collector and owner of the Haas Moto Museum and Sculpture Gallery, said in a blog post about the 2029. “There is no actual blueprint.  We are not doing a production cycle.  We are doing a piece of work that is rolling art.  It is unique.”

The 1929 Majestic was pretty amazing itself, described by Fuller Moto as featuring “a forward-thinking, modern design” representative of a new kind of motorcycle. So it was a pretty tall order to take the original and turn it on its head to create a new piece of unconventional modern art that would still have the main character and aesthetic of its predecessor. But the Fuller Moto team, led by Bryan Fuller, was more than up to the task.

“There are few times in my career that we have built something so gratifying,” Fuller said. “The 2029 combines both my drive to innovate and my love of metal.” 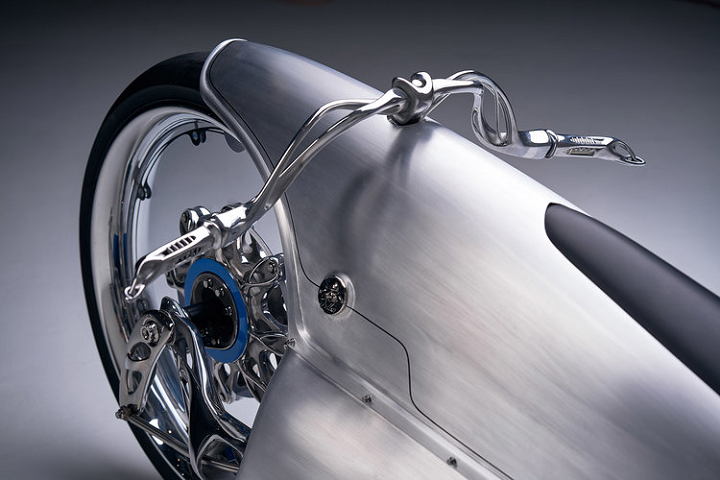 Building a motorcycle is a pretty similar process to what it once was, but modern technologies, like 3D printing, are helping to revamp the craft and develop creative new design possibilities – precisely the intent of the new 2029 bike.

“It leaves us thinking, “if you had absolutely no limitations, what would you create?”  Welcome to the new age of customs,” the blog says. 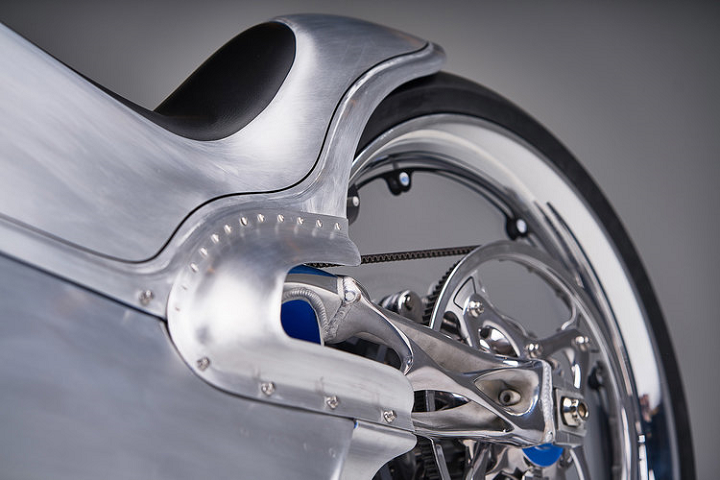 Fuller was looking to create intricate, “next level design elements” for the 2029 that are very difficult to make by hand, which is why he decided on metal 3D printing to manufacture the chassis components for the motorcycle. He was inspired by human bones and generative and parametric designs for the handlebars and suspension parts, and worked with the company’s lead metal fabricator, Bryan Heidt, to fully flesh out the concept.

“3D printing is a lot like TIG welding, only a really fine layer at a time,” Fuller stated. 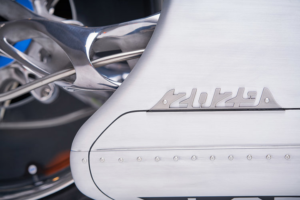 To achieve the best form and function for the 3D printed motorcycle parts, Heidt came up with CAD model dimensions, and Fuller Moto sent the models to futurist designer Nick Pugh, a movie concept artist who has worked with movie studios like Disney, Fox, Sony, and Universal to create, as the blog states, “visually complex story-telling” for movies such as Star Wars. The parts – some of the important visual elements of the 2029 motorcycle – were 3D printed by Oerlikon out of strong, yet lightweight titanium; the material has a very high strength to weight ratio, making it ideal for this type of application.

This electric motorcycle is one of a kind, with clear polycarbonate wheels, an unusual hub-centric steering instead of a traditional front fork setup, an enclosed sculptured aluminum body similar to the original, and the 3D printed parts. The unique steering plate mounted on the hub was 3D printed out of titanium, as was the front stabilizer arm on the outside of the front swing arm, which “captures almost a sword shape look.” 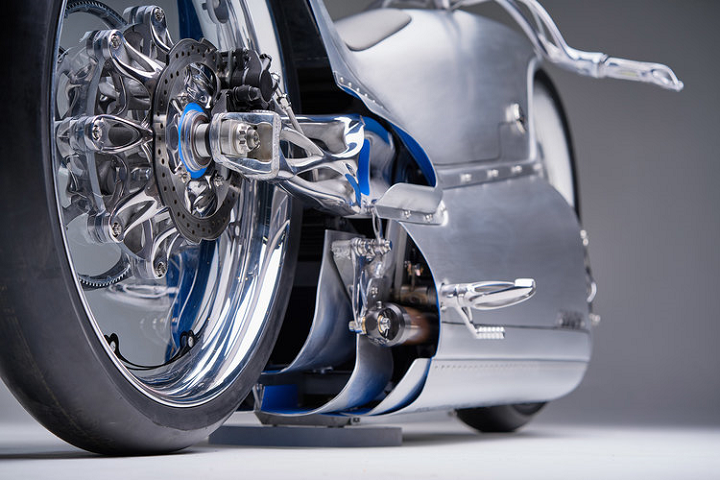 The Fuller Moto team took recent innovation in motorcycling into account while developing the unconventional concept for the 2029. For instance, an electric powertrain would be a good fit, so a Zero Motorcycle FX electric bike, with 78 ft/lbs of torque and a 100 mile range, was used as the foundation. The length matched that of the 1929 Majestic, but the batteries were too high in the stock chassis and the motor too low, so Fuller flipped it upside down and modified the batteries so they were positioned low enough to align the motor with the 23″ wheels. 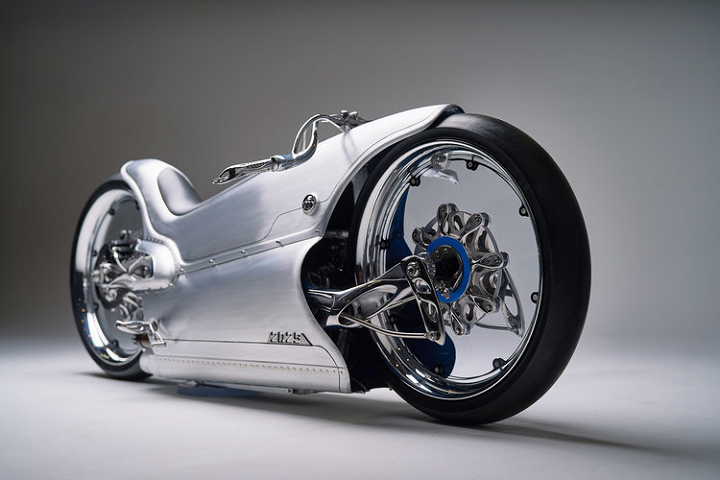 The interior parts of the 2029 body were sprayed with a tinted blue in order to reflect the color onto the silver bike. Blue was chosen because it featured in the original 1929 Majestic emblem. The blog post goes into further detail about the bike’s manufacturing:

“The initial outline was made with 1/4” steel rod MIG welded together and bolted on to the aluminum chassis.  This allowed it to be removed and worked from the bench.  Patterns were made from chipboard and then shaped.  3003 H14 .063 thickness was used to form the panels.  To make the top ridges of the front and rear fender areas, first a 4-inch wide piece of Aluminum was broken in the center.  Then a Pullmax die was cut on the MultiCam WaterJet to the shape desired and run through on high speed, providing a consistent streamlined side view profile to the top edge.  Fuller patterned and shaped in the “gills” in front of the low wheel.  The “gills” were constructed to be diffusers for the air that comes through the body panels, thereby reducing drag and also filling an unused and ugly space.”

The Fuller Moto 2029 electric motorcycle, with its 3D printed parts, will have a public debut during the Handbuilt Motorcycle Show. After that, it will go on display in the Haas Museum’s Custom Shop, right next to the ShoGun and Chief Ambassador Fuller Moto bikes.