Every day, additive manufacturing is evolving. Unsurprisingly, this also means that it is becoming more and more complicated to master all its applications and technologies. Even for experienced workers within additive manufacturing, this can sometimes lead to difficulties, especially when it comes to the appropriate parameters for 3D printing. The result: a costly endeavor that requires a lot of human resources. Whether it is due to the right printing speed or rather the amount of material, 3D printing has its very own parameters that depend on technology and material. To solve this problem more easily in the future, researchers at the Massachusetts Institute of Technology (MIT) have now used artificial intelligence (AI) to streamline these issues.

This particular AI is a machine learning system that has been developed by the researchers with the aim of preventing potential errors within material processing in 3D printing and correcting them in real time if necessary – and without the need for human assistance. First and foremost, it was important that this learning system had been taught a neural network through simulations so that it could understand which parameters were the right ones for printing. After countless tests and trials, the MIT researchers finally applied their system to a 3D printer in practice, and the result was astonishing: the 3D-printed parts were much more accurate than usual thanks to the adapted parameters. 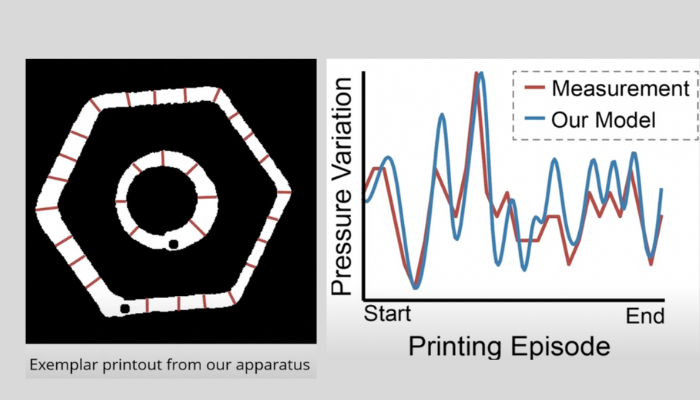 Data show the imperfections and problems which can arise during printing (photo credits: MIT).

Why is Artificial Intelligence used in 3D Printing?

The research team, consisting of members from the fields of mechanical engineering, electrical engineering and computer science, among others, have always had a clear goal in mind in their research: to simplify 3D printing and thus also make it easier for companies to integrate new materials into their 3D printing process, as well as to respond perfectly to changing materials or environmental conditions, which would thus no longer have any influence on the process. Wojciech Matusik, lead author as well as professor of electrical engineering and computer science at MIT and leader of the Computational Design and Fabrication Group (CDFG) within the Computer Science and Artificial Intelligence Laboratory (CSAIL) adds, “This project is really the first demonstration of building a manufacturing system that uses machine learning to learn a complex control policy. If you have manufacturing machines that are more intelligent, they can adapt to the changing environment in the workplace in real-time, to improve the yields or the accuracy of the system. You can squeeze more out of the machine.”

One particularly big challenge for the MIT researchers was, and still is, simply the fact that the optimal printing parameters change depending on a particular situation, which also means they had to consider the behavior of the material in other environments, with other hardware, or even whether it was a new batch. To help them understand what was happening in real time during printing in the 3D printer, a machine vision system was developed with two cameras that kept their focus on the printer’s nozzles, recording properties of the material as it was printed. The images provided were then processed to adjust and avoid the recorded defects in the rest of the process based on this.

The Path to Successful AI Simulation

In order to train the developed system, learning was carried out using the principle of “trial and error.” The task was for the system to select the correct pressure parameters itself. If an error occurred, it was usually because the system used either too much or too little material for the print. The researchers also observed that with the help of AI in 3D printing, a much more accurate result thus emerged after several simulated prints.

However, it is no secret that the real world is not a simulation. To address this issue as well, the researchers have also created a numerical model that takes into account, for example, the 3D printer’s noise, so that they can incorporate all the details that occur during printing into their system. One researcher commented, “The interesting thing we found was that, by implementing this noise model, we were able to transfer the control policy that was purely trained in simulation onto hardware without training with any physical experimentation. We didn’t need to do any fine-tuning on the actual equipment afterwards.” To learn more about the MIT researchers’ exciting 3D printing and AI project click HERE.