Created using a custom 3D printing process, the nanomagnets are in the shape of a DNA-inspired double helix. According to the research team, this unconventional structure lends itself to strong magnetic field interactions between the helices in a manner never seen before. Specifically, by twisting around one another, the 3D printed helices produce nanoscale topological textures in the magnetic field they generate.

The team believes it can harness this phenomenon to closely control magnetic forces at the nanoscale, paving the way for ‘next generation’ magnetic devices.

Claire Donnelly, first author of the study, explains, “This new ability to pattern the magnetic field at this length scale allows us to define what forces will be applied to magnetic materials and to understand how far we can go with patterning these magnetic fields. If we can control those magnetic forces on the nanoscale, we get closer to reaching the same degree of control as we have in two dimensions.”

Foto: A 3D printed helical nanomagnet and its novel magnetic field. Image via University of Cambridge.

The limitations of 2D magnetic systems

Though you may not realize it, magnetic devices are integral to many different parts of our lives. Magnets are used in energy generation applications, they’re used in data storage, and they’re crucial for day-to-day computing.

Donnelly adds, “There has been a lot of work around a yet-to-be-established technology called racetrack memory, first proposed by Stuart Parkin. The idea is to store digital data in the magnetic domain walls of nanowires to produce information storage devices with high reliability, performance, and capacity.”

Transitioning to this new domain has proven difficult until now, as there’s a need to understand the effects of scaling up to 3D on both the magnetization and the magnetic field of the systems.

As such, Donnelly and the rest of the team have spent the last few years researching and developing new methods to visualize 3D magnetic structures. They’ve also developed a 3D printing technique for magnetic materials – the one used in the present study. 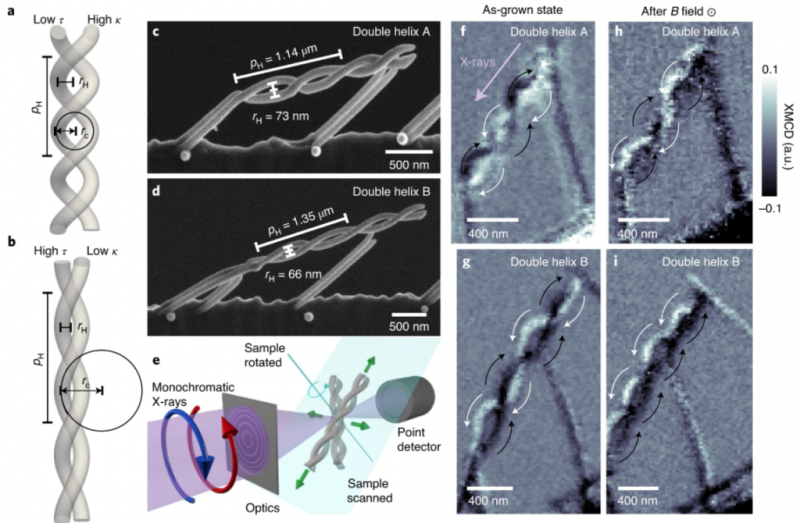 SEM imaging of the 3D printed nanomagnets. Image via University of Cambridge.

Scaling magnetization to the third dimension

Once the nanomagnets were 3D printed, the Cambridge team performed their 3D measurements at the PolLux Beamline of the Swiss Light Source at the Paul Scherrer Institute. It is reportedly the only beamline to offer soft X-ray laminography – an advanced X-ray imaging technique.

The researchers found that their 3D printed helical magnets featured a different magnetization texture to what is usually seen in 2D systems. Pairs of walls between magnetic domains were found to be coupled, resulting in deformation. By attracting one another, the walls were seen to rotate and ‘lock into place’, generating strong bonds between the helices of the printed magnets (much like the bonds in a DNA double helix).

Donnelly said, “Not only did we find that the 3D structure leads to interesting topological nanotextures in the magnetisation, where we are relatively used to seeing such textures, but also in the magnetic stray field, which revealed exciting new nanoscale field configurations!”

Further details of the study can be found in the paper titled ‘Complex free-space magnetic field textures induced by three-dimensional magnetic nanostructures’. 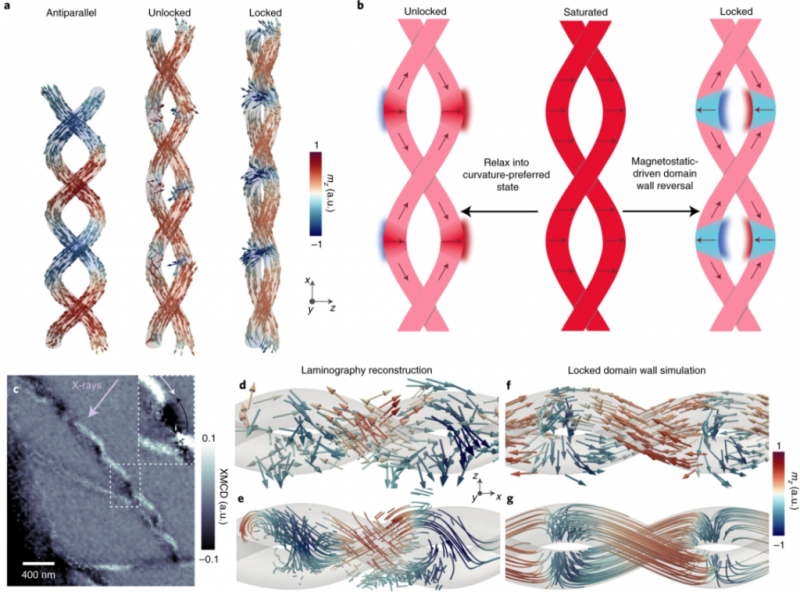 The three dimensional magnetic fields of the 3D printed nanomagnets. Image via University of Cambridge.

Elsewhere, researchers from the University of Grenoble have previously developed a method of 3D printing microstructures with deformable magnetic fields. The approach involves adding magnetic microbeads to a standard two-photon polymerization (2PP) 3D printed object. By tailoring the properties of the materials, as well as the orientation of the beads, the scientists were able to create complex nano-tweezers that could be operated using only an external magnetic field.