Named Suspended Layer Additive Manufacturing (SLAM), the approach enables the printing of a novel biomaterial that accurately simulates the structure of mammalian skin.

In fact, according to the researchers, the biomaterial is the first of its kind to simulate all three of the major layers found in skin – the hypodermis, the dermis, and the epidermis – making it a unique tri-layered skin equivalent. Early experiments suggest that the 3D bioprinted skin can be placed at the site of a wound to induce healing, reducing scar tissue in the process.

Although our skin is quite adept at healing surface-level cuts, deeper chronic wounds are often more of a challenge to repair. This is because our skin actually consists of three different layers, and the top layer tends to heal faster than the bottom layers, causing deeper wounds to sometimes collapse on themselves. The result is scar tissue and a reduction in normal skin function.

Medical researchers have been trying to develop accurate skin replacements for some time now, but the UK team affirms that none of these skin models have been able to simulate both the chemical and mechanical characteristics of the real thing. The problem? Mimicking the tri-layered structure has proven difficult, as each layer is vastly different in its properties.

“You effectively have three different cell types. They all grow at different speeds,” explains Alan Smith, co-author of the study. “If you try to produce tri-layered structures, it can be very difficult to provide each of the requirements of each different layer.” 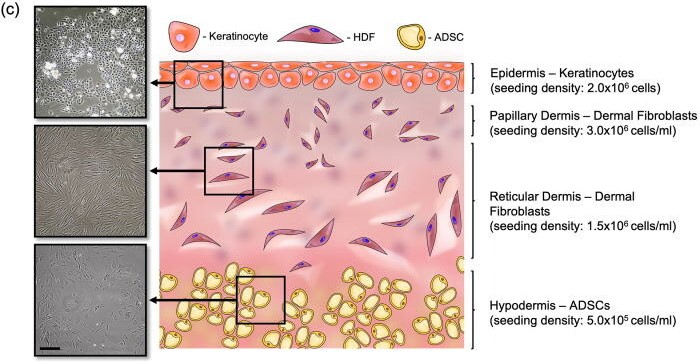 The hypodermis, the dermis, and the epidermis. Image via University of Birmingham.

In order to better mimic the natural structure of skin, the researchers employed SLAM. The bioprinting technique involves suspending layers of biomaterial in a gel, where they can be arranged and stacked into strips while maintaining their formation. In the case of the present study, the researchers deposited hypodermis, dermis, and epidermis cells into the supporting gel before washing the gel away, leaving behind just the layered skin equivalent.

To test the printed skin patch, the team then cut a hole in a sample of pig skin, filling the hole with the printed skin equivalent. The entire model was cultured for a period of two weeks and the researchers actually observed signs of repair in the wound.

“We used a stain that allowed us to quantify the integration we got between original material and tissue,” added Liam Grover, co-author of the study. “We were able to demonstrate some integration even after a short period of time.”

Although the team couldn’t fully assess the efficacy of the 3D printed skin substitute due to the healing process taking longer than the model would allow, the initial results are indeed very promising. The UK researchers now intend to conduct a longer investigation using more robust models for chronic wounds, with the ultimate goal of 3D printing tri-layer skin substitutes capable of healing real human skin.

Further details of the study can be found in the paper titled ‘A suspended layer additive manufacturing approach to the bioprinting of tri-layered skin equivalents’.

The field of bioprinting is a fast-growing one, with applications in everything from regenerative medicine and drug discovery to food. Just recently, biotechnology firm Prellis Biologics has announced the creation of a novel antibody discovery platform based on 3D bioprinting. Effectively a functioning immune system in a dish, the firm’s platform is capable of recreating human cell-to-cell interactions and immune responses, making it ideal for conducting disease therapy R&D.

Elsewhere, regenerative medicine firm CTIBIOTECH recently developed a new 3D bioprinting platform to deliver personalized medicine for patients with colorectal cancer. Developed in partnership with the Medical University of Plovdiv and the UMHAT-Eurohospital in Bulgaria, the platform is capable of producing cost-effective and reproducible human colon cancer disease models and can also be used for chemotherapeutic screening.