Performing complex surgeries, especially those related to the brain or skull, is difficult at the best of times. And they get exponentially harder when it comes to babies and children, especially newborns. In a recent case, 3D printing was able to help save a newborn baby who needed to undergo surgery immediately after birth to repair an occipital bone defect in the skull wherein it was not properly formed. Sygnis SA, a Polish deep tech company that recently acquired Zmorph, used additive manufacturing to create a 3D printed model that was crucial in the success of the neurological operation on the newborn infant.

Though perhaps less discussed than applications like prostheses and orthoses, one of the leading ways that 3D printing is being used in the medical sector is through pre-surgical training and prep. By printing out an exact replica of the area that needs surgical intervention, in this case the skull, made from scans of the patient, surgeons are able to practice before the surgery itself, reducing mortality rates especially for complicated procedures like this one. In order to help save this particular baby girl, Sygnis was approached by Pawel Ozga, a specialist in medical imaging segmentation and a volunteer of the e-Nable Poland foundation under Dr. Kryzstof Grandys, to create the model as quickly and as detailed as possible to increase the possibility of survival. The child was diagnosed immediately after birth with the occipital bone defect which also meant that part of her brain was exposed, a dangerous condition which if untreated is fatal. 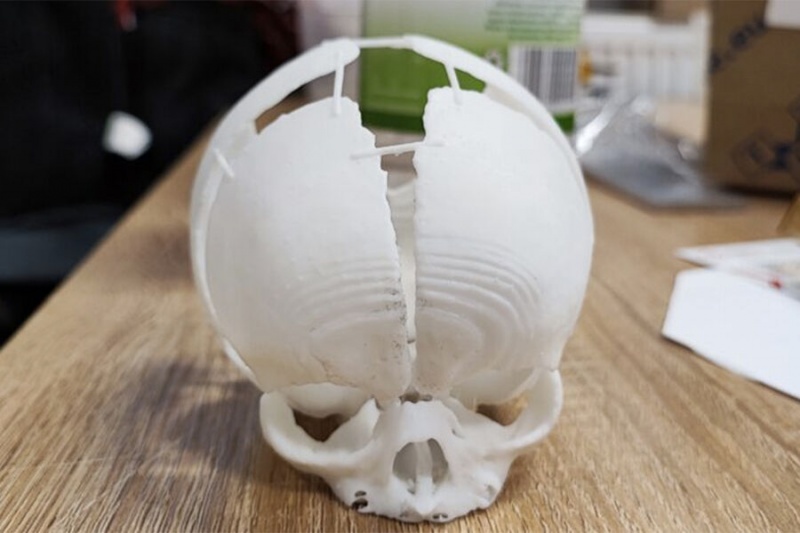 The SLA model of the newborn baby’s skull including the defect which needed to be repaired (photo credits: Sygnis SA)

The creation of the pre-operative skull model took place in February 2022. After the baby was born, she was diagnosed at the University Children’s Hospital in Krakow. The 3D printed skull was a key part in pre-surgical planning as a way to practice in a short period of time with an exact model of the baby’s skull. Indeed, Sygnis actually created two models, one using SLA and the other with SLS. They turned to the two different technologies to take advantage of both.

For the model made using SLA, it was done on the Sygnis Flashforge 8.9s 3D printer. The benefit of SLA is that the doctors were able to get a more detailed and accurate reproduction of the skull according to the MRI and CT scans. However, the materials used are not as robust. That is where SLS comes in with this model created on a Sinterit Lisa Pro 3D printer. SLS also produces highly detailed, accurate pieces but thanks to the use of PA12, the parts were more robust. The meant that doctors were able to actually to be used by the surgeons for practice with their tools before the operation. Additionally, as SLS 3D printing does not require support structures, with the powder cake instead serving that role, the doctors were able to have a perfect reproduction of geometrically complex bone structures. By being able to practice beforehand with both models, the doctors were able to quickly and effectively prepare for the difficult surgery.

Beyond the ability to perfectly recreate the skull of the baby girl with only the scans, part of the reason why the doctors turned to 3D printing to create this 3D printed skull model on a 1:1 scale was thanks to the speed of the technologies. As the defect had not been diagnosed during the pregnancy, time was of the essence in getting the surgery completed in the shortest amount of time. In fact according to the case study from Sygnis, they only had 96 hours to make the models, deliver and allow the doctors to perform pre-surgical testing. Thankfully, the skull printed using SLA was complete in only 8 hours while the one made with SLS was completed in 24 hours. 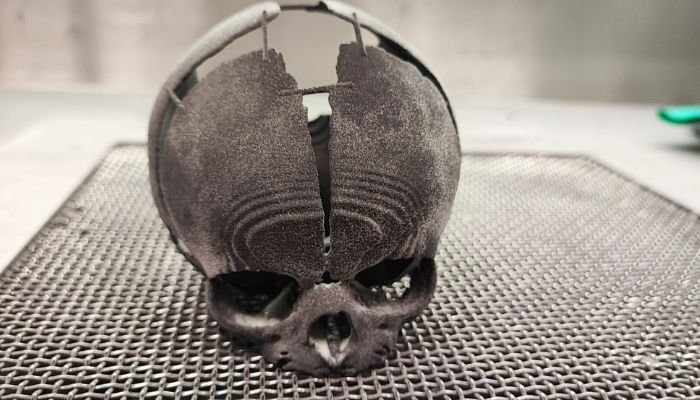 By using both an SLA and SLS (pictured here) model, the doctors were able to effectively practice the surgery before it took place despite the time constraints (photo credits: Sygnis SA)

The operation was successfully completed by February 28th and the little girl was able to be discharged from the hospital. Prof. Lukasz Krakowczyk, MD who was the surgeon in charge of the operation concluded that “the imaging studies were useful for determining the skull bone defect. However, they did not perfectly coincide with the skin defect, which is why printing the model was so important. 3D printing will also be essential at the stage of reconstruction of the skull bone defect, when the need for perfect alignment and planning of the bone reconstruction will occur.”

Though the final result cannot be known as the child will need more treatments in the future, it is clear that this surgery was able to be a success thanks to the intervention of 3D printing. Sygnis also expects to do even more cooperations of this type as they further use pre-surgical models to increase success after surgery. You can read more about the case HERE.