Teams from ETH Zurich have revealed yet another project involving additive manufacturing. This time it is a ceiling designed in part using 3D printing, called HiRes Concrete Slab. Installed last fall in Switzerland in the NEST research building of the ETH, it was made from 3D printed molds and used 70% less material compared to traditional methods. The slab has a curved shape, reminiscent of the structure of tree leaves. A rather complex design that would have been much more difficult to obtain in any way other than through 3D printing.

In the architectural sector, 3D printing is used in a variety of ways: whether to design parts directly, prototypes or even molds as in this case. Thanks to its design freedom, it offers more opportunities to designers and architects. Here, ETH Zurich wanted to use a more energy-efficient and less material-intensive manufacturing method with a unique design. As we know, concrete is still very harmful to our environment and in traditional construction, a lot is consumed. 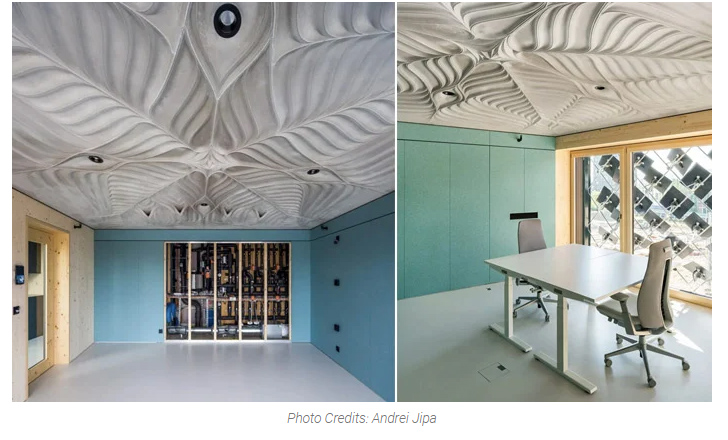 Additive manufacturing seems like an ideal candidate. Instead of using a 3D concrete printer that could have deposited layer after layer of material to create the ceiling, the teams opted for polymer technology to create 43 molds. They then poured the concrete into them. The resulting pieces were only 5 cm thick. The advantage of this method is the possibility of adding construction elements such as ventilation, heating or cooling systems. In fact, the teams claim to have 3D printed four custom-made plastic ventilation ducts before the concrete was poured.

The team adds, “This new approach can have a significant positive impact on the built environment: reducing embodied carbon and operational energy, increasing user comfort, and giving architects unprecedented design freedom.” The slab is therefore an assembly of the various molded elements, which come together quickly. The joints between each component are clearly visible in the photos, giving an effect of depth but also of continuity, like the veins of a leaf.

The ventilation systems were 3D printed

ETH Zurich concluded, “the flowing contours reach their highest density in a central peak and fade out towards the perimeter. This decorative pattern is informed strictly by its function, the constraints of the fabrication process, and efficient assemblage and demountability.” You can find all of ETH Zurich’s projects on their website HERE.